The Hose Reel sits between the Command Module and the Lance. Its role is to receive HP water (with or without abrasive) along with electrical signals to/from the lance and transfer them into the Hose/Umbilical. It also provides storage for the Hose/Umbilical.

The hose reel has a ‘slip ring’ incorporated into it to allow the transfer of the electrical signals between the Lance and Command Module to pass backwards and forwards.

Hose/Umbilical sits between the Hose Reel and the Lance and its role is to enable high pressure water (with or without abrasive) to be sent to the Lance and electrical signals sent to/from the Lance.

The Hose/Umbilical comprises an HP Hose around which is wrapped a 4 core, flat, armoured electrical cable. The HP Hose and cable are covered by a protective shroud which is wear, heat and chemically resistant.  The Hose/Umbilical is usually supplied at a length of 80M with the first 2M on the reel being a separate section as this is the point at which most internal wear is encountered. All Hose connections are of high grade stainless steel whilst all electrical connection are of the military ‘Amphenol’ type. 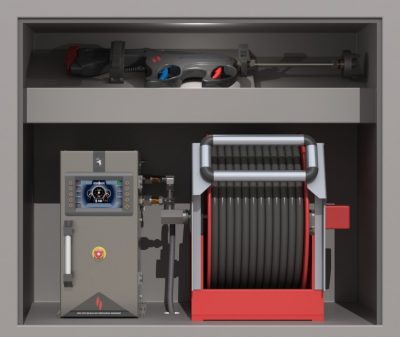 Because of the smart fluid engineering used, the hose has a very long life despite being used to carry abrasive. The Hose/Umbilical is extremely tough and can be used while ‘still on the reel’.  Because of its 3 piece design, partial replacement is possible in the event of wear or damage.

We use cookies to ensure that we give you the best experience on our website. If you continue to use this site we will assume that you are happy with it.Ok